Here’s why it should be an offence to cut, spray or otherwise destroy blooming wildflowers – in this case, Dandelions, in particular. 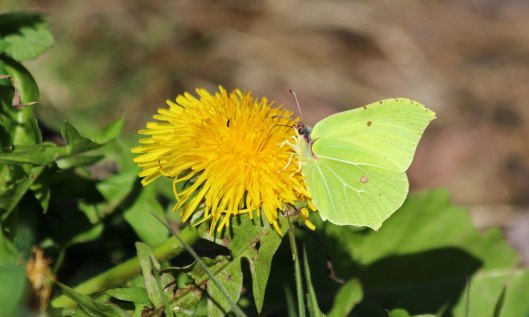 During yesterday’s daily exercise walk around Grangemoor Park I saw at least five Brimstone butterflies. These were all males, newly emerged from hibernation and already flying frantically back and forth along their chosen path-sides and hedgerows, seeking out females to mate with.

As there aren’t yet many wildflowers in bloom at Grangemoor, when it came time to refuel for their next patrol flight, every single one of these Brimstones stopped and supped on Dandelion nectar. In fact, once I twigged to what they were doing, I took to checking every Dandelion I saw, just in case it held a butterfly. So, please, PLEASE, leave your Dandelions for the insects to feed on.

Recording the biodiversity around us can sometimes be a tricky business. Take, for example, the Magpie: there’s a bird called Magpie (Pica pica) and a moth (Abraxas grossulariata) and even a fungus (Coprinopsis picacea). The same is true of the Grayling: there are both a butterfly (Hipparchia semele) and a fish (Thymallus thymallus) of that name. Then there are the Brimstones: in this case, it’s even more confusing as both are lepidoptera – one’s a butterfly (Gonepteryx rhamni) and one’s a moth (Opisthograptis luteolata). And by sheer coincidence, I saw both Brimstones yesterday.

I spotted the butterfly drinking from a Buddleja bush while I was out walking and the moth came to visit me here at home. I had left my windows open until around 10pm and this little moth came into my kitchen. I tried putting it out but it flew straight back in again and is still sitting on my kitchen bench, despite the window again being open. Not that I’m complaining, as it’s a beautiful little creature. 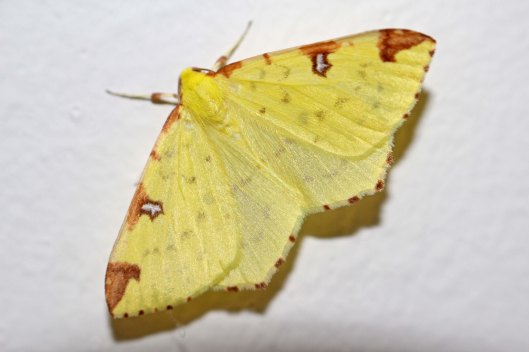 Blue skies, warm temperatures, wildflowers in bloom – what more could a butterfly want? Not much it seems as they were out in force at Cosmeston Lakes Country Park and I spent several happy hours following them around, trying to get photographs but also just intrigued by their flight patterns, the food plants they were choosing and their general behaviour. The Whites, large and small, eluded my lens, as did several Orange-tips and one Red Admiral but I did manage to snap these six. 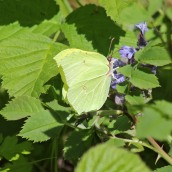 The first is a Brimstone butterfly (Gonepteryx rhamni), not to be confused with the moth of the same name. I saw two flying together, land together and then the male heading purposefully towards the female. Turns out though that her spreading her wings and raising her abdomen in the air was not a ‘come hither’ signal but rather the opposite. She was indicating that she had already mated and was rebuffing the male. I saw several Common blues (Polyommatus icarus), also easily confused with other very similar small blue butterflies. They are so vibrant! And seeing a Peacock (Aglais io) is always a treat, though this one was looking a little battered. 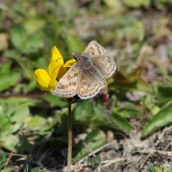 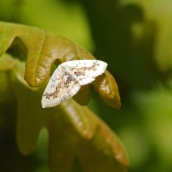 Speckled woods (Pararge aegeria) seem to be the butterflies I see most often wherever I go but I love their pretty dappling of brown and cream. The next was a new one for me and I saw two of them – it’s a Dingy Skipper (Erynnis tages), a butterfly whose caterpillars feed on Bird’s-foot trefoil so it’s often found on the short impoverished grasslands of former coal tips, rubbish tips and quarries. I’ve just learnt that it’s called Dingy because ‘it loses scales alarmingly as it get older so looks, well, dingy’ (thanks, Steven). The last is not a butterfly but a moth and rather a special moth, The Mocha (Cyclophora annularia). This moth is nationally scarce but more frequent in the woodlands of southern Britain so I was well pleased with this sighting.

Though I love many things about the coming of autumn, it is also a time when many other things I love disappear for the year. The butterflies are one of those things. Gone now are the gorgeous Gatekeepers (Pyronia tithonus) that kept me company during my frequent wanders around my local cemetery. 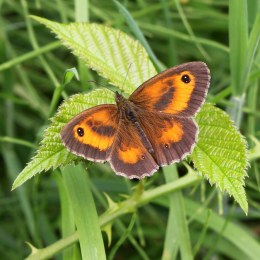 Gone too is the pale, subtle beauty of the Brimstone (Gonepteryx rhamni). Though I searched for more, I saw only one this year, at the Parc Slip Nature Reserve.

I have noticed, over the past couple of weeks, a little resurgence of Red Admirals (Vanessa atalanta), as they feast on the ivy flowers that are just beginning to bloom here in Cardiff and are providing a late season banquet for bees, hoverflies and butterflies. All too soon, these creatures will also fade away, hopefully to come again in the springtime when the temperatures begin to rise and the days to lengthen. 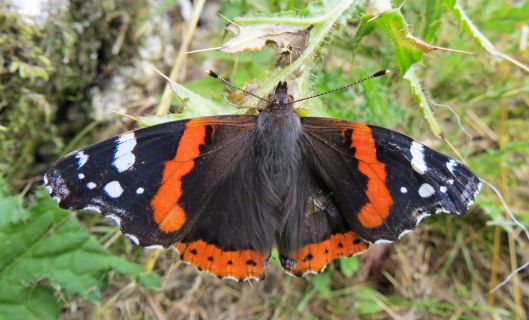