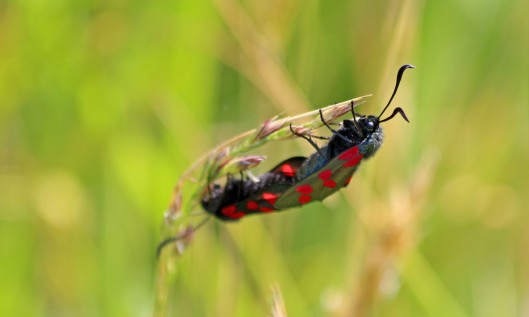 Today I spotted this larva, looking very close to pupating, and, nearby, a very fresh-looking cocoon.

Death is always sad to see but, in this case, the moth will support the life cycle of other creatures.

I’ve been spending a lot of time over the past couple of weeks staring at Hemp agrimony flowers. I’ve not yet found what I’ve been searching for – you’ll be the first to know when/if I do – but, in the meantime, here are just a few of the lovely creatures I’ve spotted nectaring on these pretty flowers: a Dingy footman moth, a Six-spot burnet moth and a Gatekeeper, a Painted lady, a Red admiral, a Ringlet, a Speckled wood and what might be a Willow beauty moth, but the jury’s still out on that one. 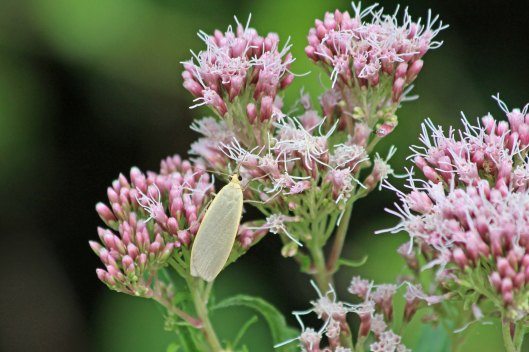 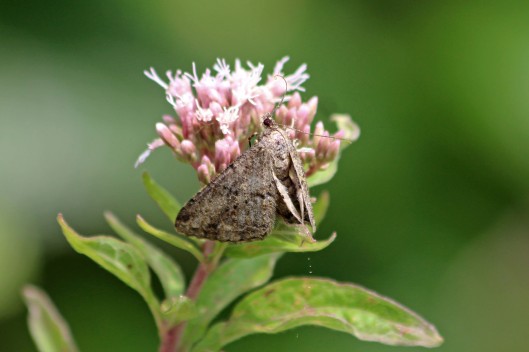 Remember I said on Friday that they’d be ‘coming soon‘, well here they are. The Six-spot burnet moths have begun to emerge, buzzing around the wildflowers like little red-and-black bumblebees. Delightful! 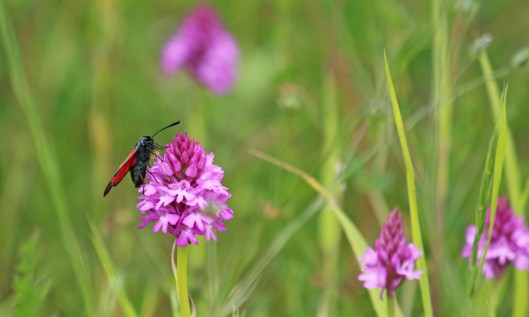 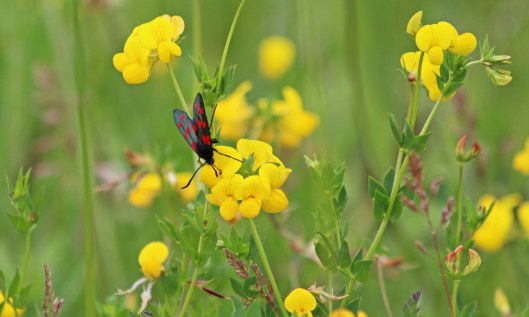 First, the caterpillar. Now I know this is a bit like the chicken and egg debate – which came first? – but my sequence is chronological for 2019. This is the caterpillar / larva of a Burnet moth, most likely a Six-spot Burnet (Zygaena filipendulae), as they’re the species I’ve seen at this site in previous years. I only found out this week that they over-winter as caterpillars, and they’re now enjoying a final munch before beginning their transformation. 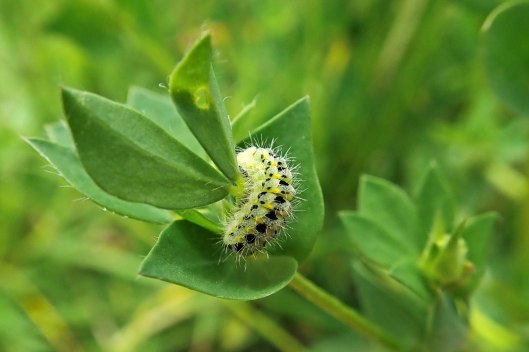 Second, the pupa. Some of the munchers have already begun their metamorphosis into moths. This week I’ve spotted quite a number of the papery cocoons they spin to house their pupae while they go through this process.

Third, the moth. In previous years, the Six-spots have begun to appear around the beginning of July but the weather conditions can have an effect on their emergence. So, eyes peeled for the appearance of these gorgeous creatures in a meadow near you very soon!

p.s. And if, by some chance, it’s actually a Five spot Burnet (Zygaena lonicerae), then it will look like this – you just have to count the dots! 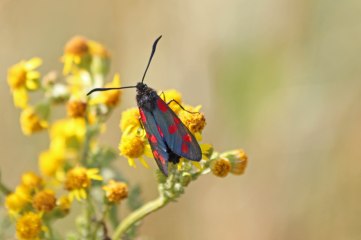 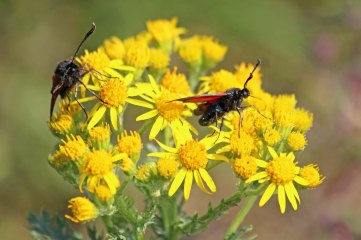 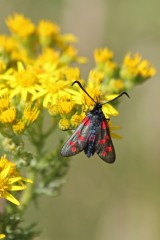 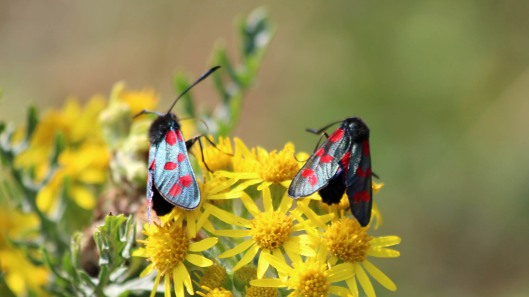 Day 25 of #30DaysWild was hot – the hottest day of the year so far in Wales! I’m not a huge fan of the heat or the burning sun – one of the reasons I moved to Britain was to escape them, but the climate is a’changing. The only good thing about sunshine is that it brings out the Lepidoptera, the butterflies and moths, though even they looked a bit frantic, as if the heat was making them crazy. Still, on my Penarth – Lavernock – Cosmeston – Penarth circuit, I did manage to see my first Small skipper for the year and a host of other fantastic Leps as well. 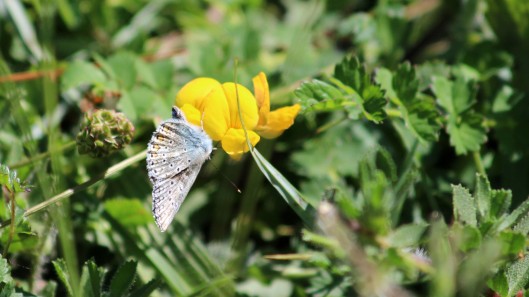 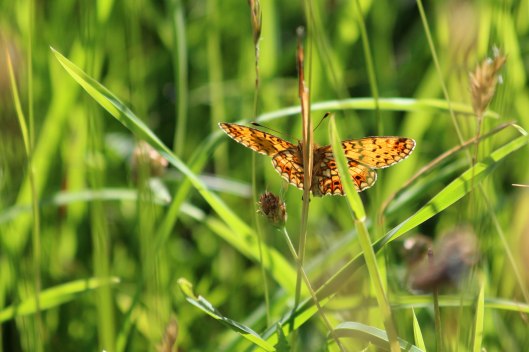 I did manage to get reasonable images of some of the many lovely little Small heath butterflies, the one Six-spot burnet moth we saw, and, my favourite, this cute Large skipper. ‘Twas a grand day! 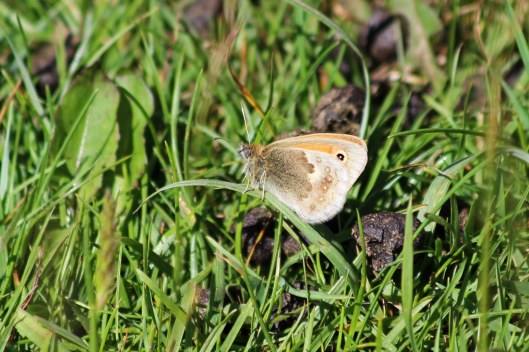 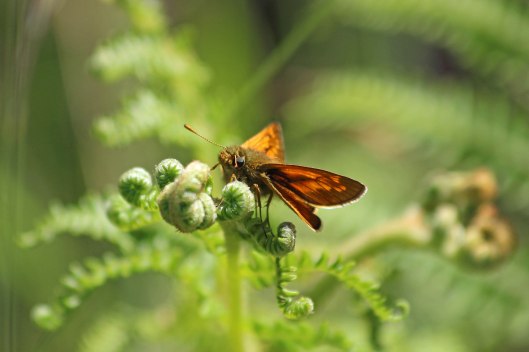 Day 12 of my #30DaysWild was spent wandering around the nature reserve at Lavernock. Though it’s not yet the riot of colour it will be in another month or so, many wildflowers are already blooming, including the Common spotted and Pyramidal orchids, and plenty of critters were feasting on nectar and pollen. 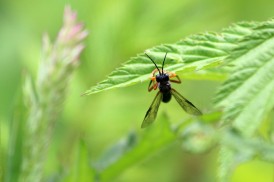 Today’s highlights included my first Six-spot burnet moth of the year, which was dazzling in the bright sunlight, and my second Small copper butterfly, a rather tatty looking specimen but still lovely to see. The Large skippers, Common blues and Speckled woods were abundant, and I also saw whites, a Brimstone and several Meadow brown butterflies. 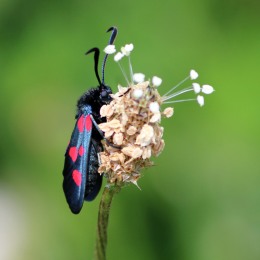 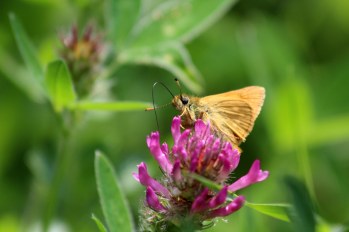 The pond was alive with dragon- and damselfly action, with both a female Emperor and a female Broad-bodied chaser ovipositing. There were three male Broad-bodied chasers constantly squabbling over territory and a Four-spotted chaser trying to avoid them all. Damselflies included Large reds, Common blues, Azures and Blue-tailed. ’Twas a very lively place today! 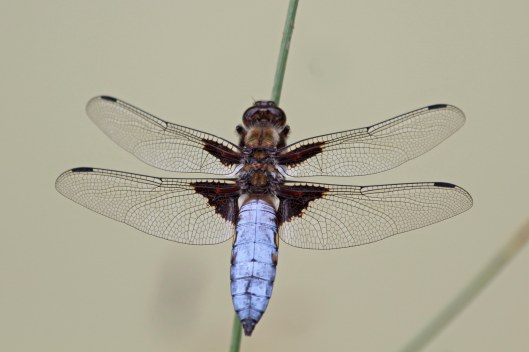 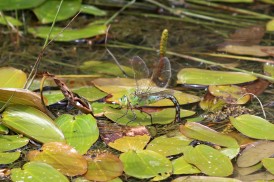 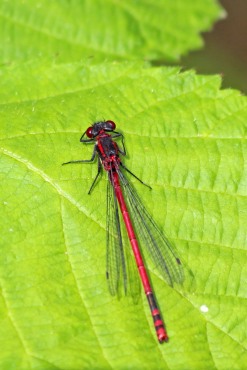 Perhaps it would be easier to ask ‘What’s not on the scabious?’ because it seems that almost every type of fly, bee, butterfly and beetle loves this plant, though that may also be because the Devil’s-bit scabious flowers in late summer – early autumn, when most wildflowers have finished flowering, and so it provides a last delicious taste of summer’s sweetness. 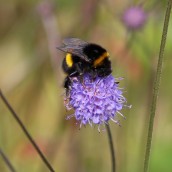 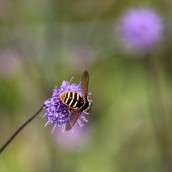 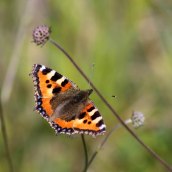 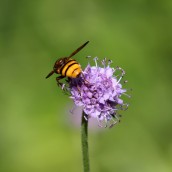 The pretty lilac of teasel flower is beginning to fade now but the mini beasts have certainly been enjoying its nectar. In my local parks and reserves it’s a favourite with the 6-spot Burnet moths and with bees of all species. And not long after those pretty little flowers fade away, the seeds will begin to form and grow, and provide food for the birds, particular the dapper little goldfinch, during the winter months. I’ll try to catch photos of them on the teasels in a couple of months’ time. 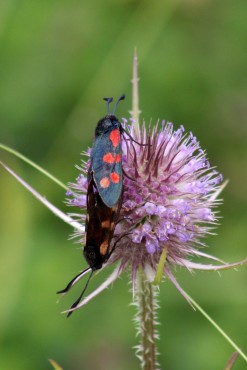 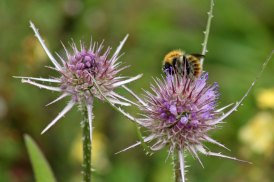 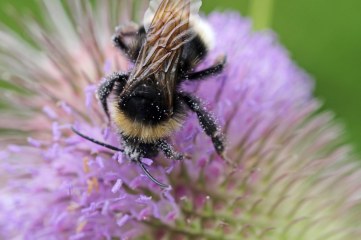