With the help of a little warm sunshine, Lavernock Nature Reserve came up trumps for me yesterday, as I found my first Orange-tip and Green-veined white butterflies for 2021, two of each. So beautiful, so lucky! 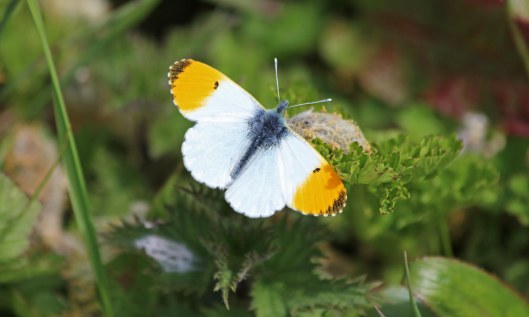 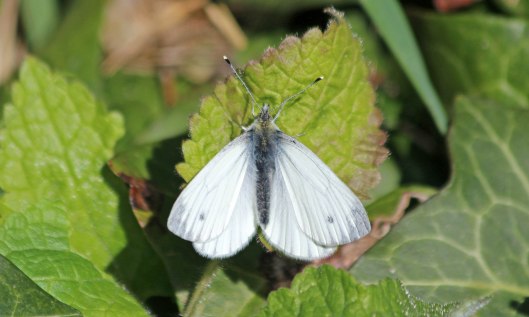 To celebrate – or, perhaps, to mourn – the last calendar day of summer, here’s a tribute to some of the beautiful butterflies I’ve seen in recent days, just because, when they’re gone, I’m really going to miss their magic.

A Comma doing what they do so well when their wings are closed – blending in. 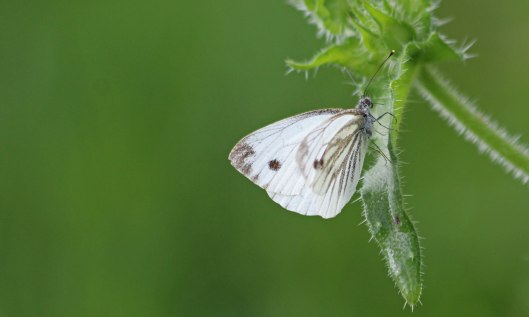 Most of the white butterflies I’ve seen lately have been Small whites so this Green-veined white stood out from the crowd.

Here’s another that stood out – an aberrant Meadow brown. There always has to be one!

The heat wave a couple of weeks ago seems to have brought in a small influx of Painted ladies, though nothing like the numbers we had last year.

Have you ever noticed how much Red admirals like blackberries? And their colours blend in to this background rather well.

Small tortoiseshells have been having a good year locally, which has been a real treat. I even found two feeding on Red valerian right at the edge of one of the local beaches this morning.

A delightful surprise from Saturday’s walk at Cosmeston, a pristine Small copper.

Some snippets from the insect world around me:

A sure sign that it’s now high summer, Common red soldier beetles (Rhagonycha fulva) can be seen everywhere, especially on the flowers of umbellifers, demonstrating why they are often called bonking beetles. 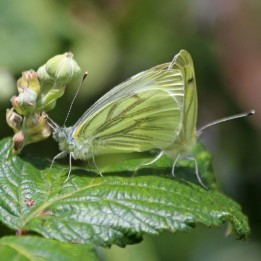 Also caught copulating, these Green-veined white butterflies (Pieris napi) were being annoyed by a third of their kind, trying to get involved in the action. 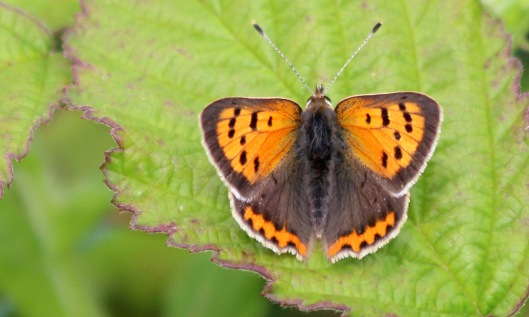 On the subject of butterflies, the second brood of Small coppers (Lycaena phlaeas) is now on the wing. This stunning specimen was only the second Small copper I’d seen this year, so was a very welcome sighting. 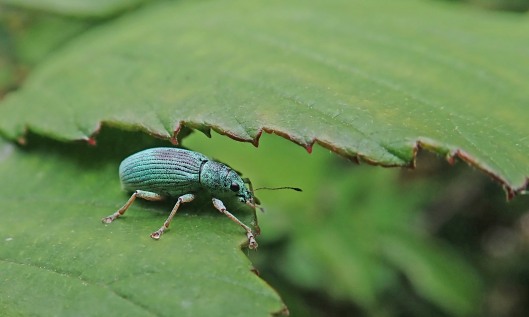 There’s nothing cuter than a weevil. This one is, I think, a Nettle weevil (Phyllobius pomaceus). 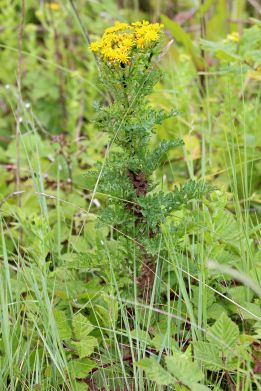 I found this odd: a colony of ants, farming a horde of aphids on this ragwort plant, have extended their nest up the very stem of the plant.

To finish this post, first, a Meadow grasshopper (Chorthippus parallelus) nymph and …

‘… flowers that fly and all but sing’
~  from ‘Blue-butterfly Day’, a poem by Robert Frost

These are some of the ‘flowers’ that have been flying around me this week, causing my heart to sing.

Comma, one of three seen on Tuesday’s walk 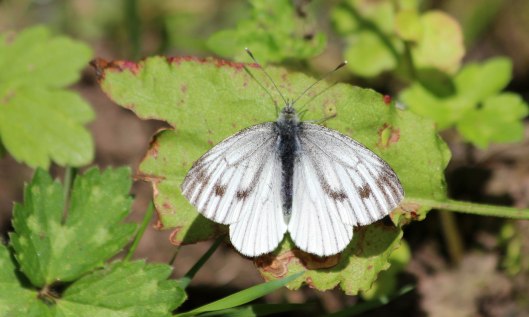 Large skipper, a butterfly with attitude

Meadow brown, from a count of 54 in a single meadow

With the current restrictions on movement, my butterflying has got off to a slower start than usual but today I spotted my first Green-veined white butterfly of 2020, my tenth species for the year, during my walk around Cardiff’s Grangemoor Park.

This pristine male only appeared briefly, before disappearing amongst the leafy trees, but it was a joy to see him. These spring-brood Green-veined whites are often very pale – I can’t even see the small dark spots on his upper wings and he has only a hint of yellow colouring on his undersides. The summer brood, when they emerge in July and August, usually show darker markings – I’ll try and do a comparison post later in the year to show the differences.

Yesterday I enjoyed another wonderful, if rather hot day’s birding with my friends from the Glamorgan Bird Club, this time wandering a trail alongside the River Ely near Peterston-super-Ely and Pendoylan. 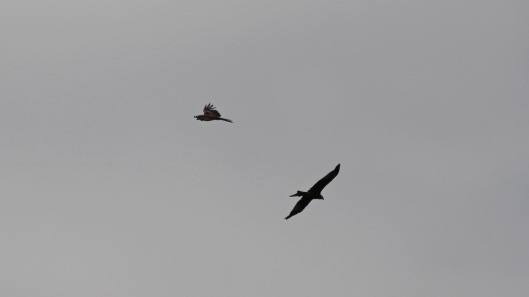 On the way there, my friend John and I had incredibly close views of three Red kites and more of these magnificent birds of prey were gliding overhead during our walk. 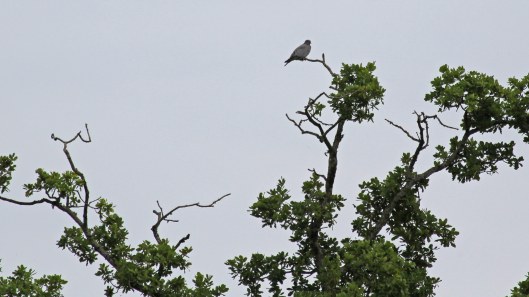 We saw Stock doves (one pictured above) sitting obligingly close to Woodpigeons so we could see the differences in the two species. 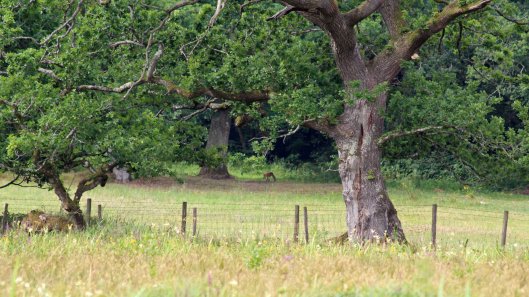 A Red fox was spotted trotting along in a distant field, its lunch in its mouth.

A large herd of large cows moved reluctantly away from the river so we could pass by. You’d have to be crazy to mess with this lady, who was keeping a steady eye on us in case we ventured too close to her calves. 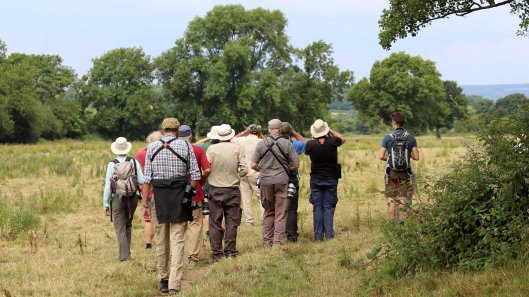 The fifteen participants … well, fourteen really, as I was taking the photo.

The meandering River Ely was running low due to the recent drought conditions here in south Wales. 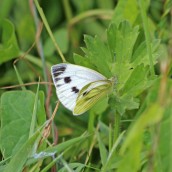 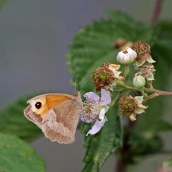 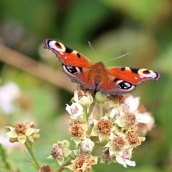 As well as birds, we also saw lots of butterflies, including these: Cinnabar caterpillars, Comma, Green-veined white, Meadow brown, Peacock, and more Small tortoiseshell than I’ve ever seen in one day before. 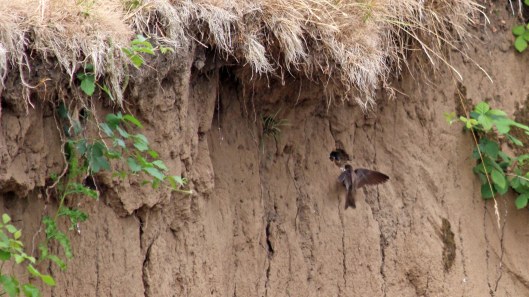 The highlight of the day for me was watching these Sand martins hawking for food over the fields and then returning to their burrows in the river bank to feed their hungry young. Magic!